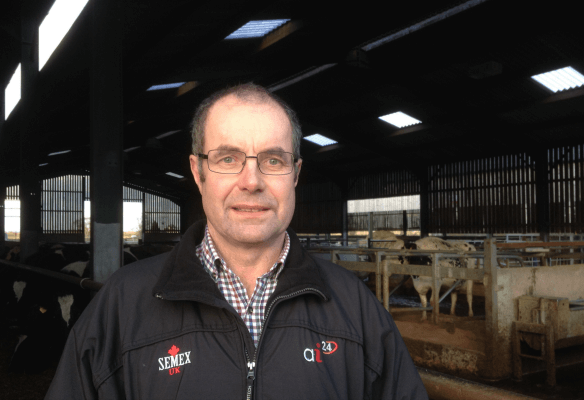 Using Genomics as a tool to benefit dairy business

Using Genomics as a tool to benefit their business is the route being taken by CIS customer and Arla members Roger and Tom Hildreth of Curlew Fields Farm, Hessey, York.

The farm, which has been in the family since 1880, currently runs 110 Holstein cows and rears their own replacements. In recent months the focus has been trying to bring the herd into a tighter calving block from July to Sept alongside ensuring that they have the ‘right’ sort of animals to match their Arla profile for solids. It is here that Roger believes genomics has a role to play.

Acting as one of the ‘host’ farms in the AHDB Dairy Calf to Calving series of meetings meant that back in 2015 Roger was asked to record 10 heifer calves from birth. These same ten heifers will be followed through to calving at, hopefully, 24 months or less. As part of the CIS support for the meetings Sandra Atkinson, area manager, provided the farm with ten kits to sample the calves, which includes a set of twin heifers.

It was these sisters which brought home the value of using the technology and information available to the farm. The data that came back in the evaluation showed a difference between a number of traits in the heifers including production and health traits, meaning that one of the heifers was more suited to the herd objectives in respect of potential for fat and protein production.

The family have now taken the decision to include genomic testing on all heifer calves born with the view to retaining those that fit the wider herd objectives and selling on others.

'Genomics is just one of the tools available to the farm to make informed decisions but embracing the availability of this technology will help build the herd for the future of Curlew Fields Farm’ Roger Hildreth.