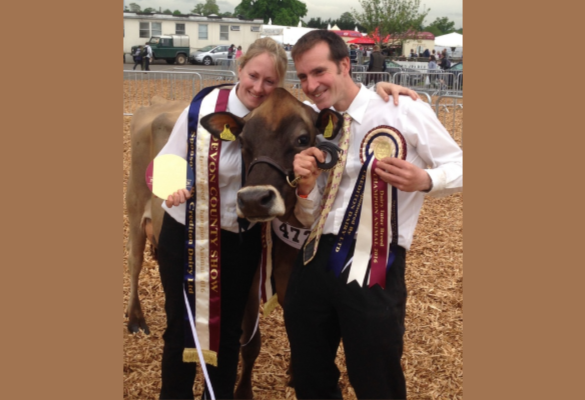 The Quintrell Herd was established in 1975 by John and Jenny Colwell when they gained their first Cornwall Council tenancy at Quintrell Downs near Newquay.

John and Jenny chose Jerseys as in 1975 they were £60 each versus £110 for Friesians!  They named the herd Quintrell Jerseys after the Quintrell Downs, the nearest village to the council farm.  The first 13 Jerseys were ex sucklers and had never seen a milking parlour before.

Glyncrest Farm is now the largest tenanted Cornwall County Council farm and managed full time by son Michael and wife Claire with support from relief milkers and contractors to do the field work, of which 100 acres is owned.  The 275 pedigree Jersey herd are milked twice a day through a 20/40 Herringbone parlour with an average 5,500kg yield, 5.4% butterfat and 3.9% protein, with milk contracted to Arla.  The herd are mainly spring calved between March and June and Michael and Claire breed their own replacements, selling about 40 surplus heifers per year.

When Michael's father John started milking in the 70’s he was very clear that you cannot be a dairy farmer without milk recording as it provides such important insight.  The two most important pieces of information looked at from the milk recording are cell count and average yield.  The herd are on the CIS Pedigree Jersey Complete package which delivers a package of services for a fixed monthly cost.  This service includes milk recording, registrations for calves, fertility and health recording, cow mating tools and type classification.

Commenting on the Pedigree Complete Package, Michael says “Of the services offered, the Type Classification visits are one of our favourite days of the year.  Classifying the animals helps us to choose the right bulls to breed with and classification also gives buyer confidence when we are showing and selling animals.  Our herd currently has 72 EX, 113 VG and 70 GP.”

Over the last couple of years, Michael and Claire have invested in new technology.  The first investment was Bolas Heat Detection which uses the smart phone app to receive early signals, such as activity and temperature, giving them a 12 hour head start on detecting mastitis and milk fever.  The second investment has been on a computer programme which monitors grass growth, making managing grass much easier and as a result they have made more silage with less waste.

The tagline for Quintrell Jerseys is "Where pedigree promise meets commercial efficiency!"  Michael’s parents had the pedigree bug almost immediately and started grading up and buying in from pedigree sales straight away.  The family started showing at the Royal Cornwall in 1977 and had their first major success at Stithians Show in the late 1970's when Whiteagle Marvellous Marigold was Reserve Interbreed Champion. Descendants of hers can still be found in the herd today in the "Tre" family. The enjoyment of showing continued but the family had to wait until 1998 before they first won the breed championship at the Royal Cornwall Show with Quintrell Viscounts Choice EX94.

Over the years many different cows have been bought establishing various cow families, the most notable of which is the colour family. This family was established with the purchase of Itaska Fillpail Magenta from the Royal Show as an in-calf heifer in 1990 for 600 guineas. Jersey island would send over 6 in-calf heifers every year to be shown then auction them off as they could not return to the closed herd on Jersey. Magenta was the Granddam of QPJSM Ultra Marine, whom is no longer with us, but a great number of her relatives are.

Q Maximus Cobalt and Q May Vermillion are both sons of hers who have many milking daughters in the herd including Q Cobalt Osprey EX94 (579 in the brochure) and Q Vermillion Isla VG85 (1888). Vermillion’s oldest are only milking heifers as yet.

Ultra-Marine has a direct line of excellents from her daughter Q Hot Pink Ex91, Granddaughter Q Ringmaster Magenta Ex93 (384), great Granddaughter Q May Carmine Ex92 (1200), and Carmine in turn has a son on the ground Q Ladd Taupe whom Cogent are currently genomic testing.

Also, in this family is Q Willow Orange Ex90 who sold to the Warren Family for 1800 guineas at Exeter Market. Other notable families include the river family and the Irish family, both established with the purchase of Hollesley Ganges back in the late ‘70’s. Both are milky families and of note is Q. Kernal Danube Ex93 (883) dam of the young bull Q. Verbatim Trent.