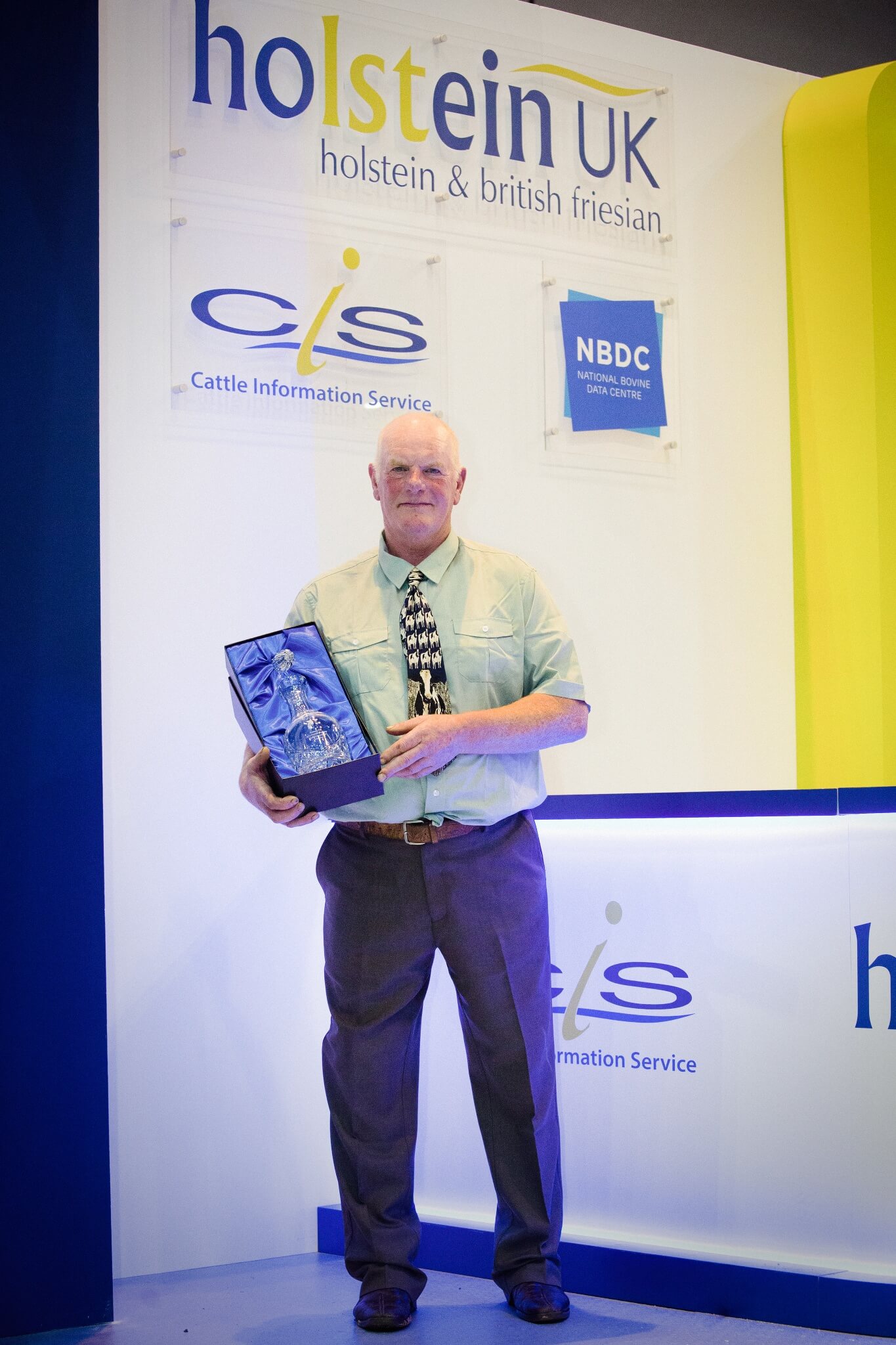 The Holstein UK Premier Pedigree Herd of 2018 was awarded to CIS Customer DJ Smith of the Oakroyal herd near Exeter at UK Dairy Day, held on Wednesday 12thSeptember. At the age of 17, instead of buying a car, Dennis Smith bought his first pedigree heifers and since then has built a prestigious herd that has been six times national finalist for the Holstein UK Premier Herd competition, having been Honourable Mention twice and Reserve Champion once. He has also been awarded Master Breeder twice, in 2007 and 2017.

The Premier Pedigree Herd Award is designed to reward herds achieving the best breeding status. To enable the Pedigree Awards to be associated with existing local herd competitions, each club nominate a single herd to represent it in this category, following their own herd competition. The nominated club winners then compete against neighbouring clubs to become one of the seven regional winners and finalists in the National Premier Pedigree Herd Competition.

National judge, and 2017 winner, David Brewster of the Boclair herd visited each of the finalists and commented that “every herd in the 2018 competition was of a superb standard, and selecting the winner was a tough decision”. The Oakroyal herd claimed top spot as Champion Herd, whilst Reserve Champion was awarded to Messrs RV Winter of the Corringham Herdand Honourable Mention to A & D Mackellar of the Drointon Herd. All the qualifying regional winners are leading premier herds, consisting of animals which are at least 90% UK bred.

The seven regional winners are:

Western – A & D Mackellar of the Drointon Herd

Northern – A Lawson & Son of the Newbirks Herd

Born into the pedigree game, Dennis Smith is the son of a successful herd manager, Len Smith. He was given the Canadian Holstein Journal to read at the age of 13 by Tony Huxtable and the Holsteins really caught Dennis’ eye.  Wanting to further his knowledge at the age of 19, Dennis worked in Canada for the renowned Master Breeder Rowntree herd. Before getting his own tenancy at 30, Dennis worked in AI for 10 years and has been farming ever since. The prestigious Oakroyal herd comprises of 70 pedigree Holsteins and supported by his daughter Noni, Dennis has built the prestigious herd focussing on health and welfare using the CIS services to monitor and measure performance through the milk recording and health testing services.

Dennis has an eye for good cattle and his flagship cow families are the Roxys, Christmases and Peaches; he has 18 Peaches milking.  One of the best cows on the farm is Oakroyal Shottle Peach 30 EX94; a second calver that is a real favourite of Dennis’s.

In recent years, the sires with the biggest impact have been Talent and Windbrook. Dennis uses a few bulls heavily and the most used is 150 straws of Heavenly Golden Dreams. He uses bulls to influence his herd and current AI sires are Mogul and Goldchip.

The Oakroyal herd will be dispersed on 25thSeptember 2018 at Sedgemoor Auction Centre. This gives every Holstein breeder the chance to own a part of the 2018 Holstein UK Premier Pedigree Herd. An opportunity not to be missed.

Commenting on the prestigious award Dennis Smith says, “I have had my sight on winning the Premier Pedigree Herd Award for a number of years and to win this in my retirement year is the highlight of my career. The Holstein breed has and always will be close to my heart and I look forward to seeing my breeding lines continue with future purchasers of the cattle at my dispersal sale”.

Peter Waring, Holstein UK President, concludes, “Congratulations to Dennis Smith who over the years has built a fantastic herd and been an excellent ambassador for the breed.  On behalf of the society we wish him all the best with his dispersal sale and his retirement”.