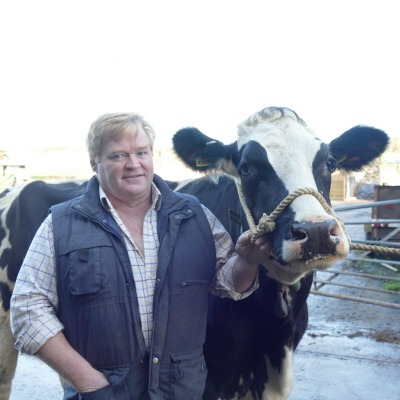 The Gould family are firmly established at their 550-acre farm at their farm near Shrewsbury following relocation to Shropshire from Lancashire.

With a small Lancashire dairy farm, and with pressures of milk price volatility and production, the family knew they had to invest in and expand their business to survive. Reliant on what became available on the farming property market, Michael, Jean, their son Mick and daughter in law Katherine bought a Shropshire farm and moved to progress what is now considered as one of the best Holstein herds in the country, the renowned Woodmarsh herd of pedigree Holsteins.

The herd is credited by its breeding achievements and supreme Holsteins – some of which have reaped world-wide demand. Whilst Mick’s parents are now retired, Mick and Katherine are very much at the forefront of the business and take a hands-on approach to the everyday dairy management and husbandry.

Starting with 90 cows in 1995, Mick has grown this high-yielding, intensive herd to 350, milking three times a day through a 26:50 swin g over parlour, with a herd average of 13,095kg. Housed all year round, the cows are split into three milking groups (high, medium and low) with the ration based around the same ingredient but varying levels depending on yielding group. Cows are housed in newly established sand cubicles, having recently moved away from straw yards. Milk production averages at 40 litres per cow with their Muller Tesco contract based around 3.85 butterfat and 3% protein – and the herd rarely fails to achieve this.

The Woodmarsh prefix was registered in 1970 and among the first pedigree purchases was a Weeton heifer from the Dewdrop family and an Isobel from Hoohall. Throughout the years the Goulds have invested in good families and Mick has kept a close eye on global breeding developments. This has led them to introduce the predominate Meolody, Lymes and Zandras families which today form the backbone of the Woodmarsh prefix.

A key highlight for Mick was in 2017 when he sold a milking heifer for £20,000, a stand out shining moment as it was the most expensive cow her has ever sold! Getting a homebred excellent 96 cow was also a great achievement and a hugely exciting time for Mick and Katherine along with when they first started selling bulls to the large AI companies. In 2005/2006 Mick believes they were the first herd in the UK to start sending embryos back to Canada – again, this was a momentous achievement for his business.

In terms of breeding, all artificial insemination is carried out by Mick and increasingly sexed semen is being used to assist with heifer conception rates. Generally, Mick will place 2 to 3 AI inseminations before the cow goes to a Holstein bull which has come from a homebred cow.

They calve all year round with an interval of 413 days and have recently joined the ARC Tag and Test scheme.   All the heifers and any bulls being kept are BVD tagged and tested; a service that brings everything together.

The Approved Registered Cattle (ARC) scheme provides traceability of registered cattle to the industry.  The integral tissue bank provides access to each animal’s DNA.  This can be called upon at any time, allowing increased knowledge through genomic evaluation, parentage verification or health testing.  As a member of Holstein UK, Mick can purchase exclusively branded ARC tissue tags from their partner Caisley. Holstein UK register the animals with BCMS and issue the passports removing the duplication of data input, leaving Mick and Katherine with more time away from paperwork. The submitted tissue vial from the tag is kept in storage and carried with that animal throughout its life. It can then be pulled upon by the owner of that animal at any time, for parentage or various genomic tests.

Mick does factored monthly CIS milk recording, two of the three milkings, and regular health testing including Johne’s on a quarterly basis which is a stipulation of his milk contract.  The herd is on the Holstein Complete package which means Mick has all the results and information on the herd in one place which his vets can also access via YourHerd or MobileHerd.  The Complete package also includes two Type Classification visits per year and access to Cow Mating tools including WebMate and Bull Selector.

Commenting in the future and where Mick sees the business in the next 5 years, he says “We have built up the Woodmarsh herd to a level that we are extremely proud of. We have had to be critical on ourselves and we have learned and improved along the way. Self-analysis is key and you should never become too complacent. I am very much a believer that there is always an opportunity for positive people; you should grab these chances and run with them. When I do reach 60 it is likely that we will stop milking and look to alternative revenue streams, such as the Limousin breeding. At the moment we have 20 pedigree Limousins, but I would like to see this increase overtime. Whilst it has been a passion of mine for years, it is fact that dairying is a hard and demanding way of life – we can’t be milking cows forever no matter how hard we try!”

In terms of the UK dairy industry, Mick believes it is becoming polarised into two systems, intensive and extensive. In 1995 Mick and Katherine realised that if they didn’t expand they would have to get out. He knows that’s farming is becoming more intensive, and farms and herd sizes are increasing – it is the way the industry has had to evolve to survive and compete on global scales. With Brexit on the horizon, there are still so many unanswered questions for Mick and the rest of the dairy industry but focus needs to be on continuing to innovate, invest and accept that change is inevitable.