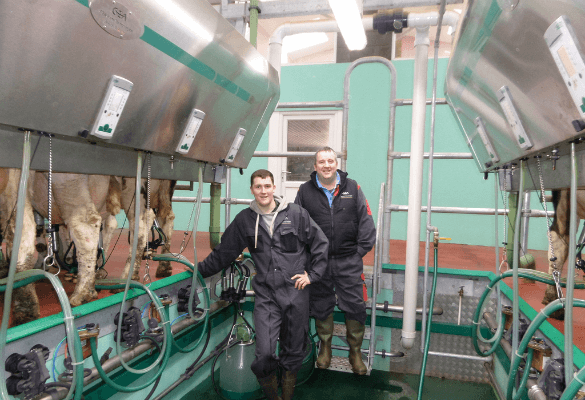 Known locally by hundreds of school children KitKat farmer, 4th generation farmer Gilmour Lawrie has the oldest pedigree Ayrshire herd in the world.  Gilmour, his wife Caroline and son Kevin run two herds Brieryside, and Arranview at Sandyford and Myremill near Ayr, along with a small Eastford herd of Red and White Holsteins.

The 600 cows are milked at two separate units and are one of the biggest and most progressive units in the UK.  Supporting the Lawrie family is CIS Regional Manager Liz Brown who provides a monthly milk recording service with pregnancy testing.

“Over the last 3 years, we have invested heavily in the infrastructure at both farms.  We see how the infrastructure works in front of our eyes however when it comes to the cows you can only see so much which is where CIS play a very important role.  The information provided by CIS from our monthly milk samples is fantastic; it enables us to make informed decisions about each cow and the overall herd.  We were one of the first farms to use PregCheck when it was launched and now we use it across the whole herd as part of the CIS package.  Access to the online portal YourHerd is 24/7 so we to review data anytime and our son Kevin uses the app Mobile Herd when out on the farm,” comments Gilmour.

PregCheck is a non-invasive, hassle free service using milk samples from recording to help managed the reproductive cycle.  The CIS milk pregnancy test is based on Elisa technology and detects the absence of Pregnancy Associated Glycoproteins (PAGs) in the milk sample. It has a 98% level of accuracy.

The closed Ayrshire herd at both farms are milked twice daily, with average yield 9,400 litres with butterfat at 4.3% and protein at 3.53%.  Both herds are below the national calving index, this has been supported by the use of the CIS PregCheck service.  Sandyford is running 46 days below the national rolling average, with Myremill also running below.

The award winning herd has won numerous accolades in the show ring including reserve champion at this year’s Royal Highland Show with the red and white Holsteins and Gilmour has won the Ayrshire section five times over the years.  He has also won the Champion at Ayr show, super heifers and super cow at Agriscot, and won the highest placed Ayrshire herd in the gold cup competition six times.

In terms of the investment, the Lawrie family have installed a GEA 30/30 global 90i rapid exit parlour, with feeding according to yield at Sandyford with a viewing gallery.  At Myremill they have a modern 290ft by 122ft Ve-Tech dairy unit with Air Keo curved light ridge, Air Koe cutting for improved light, curtains to control temperature and impressive Belgium grooved slats.

The cows at Myremill are housed all year round which supports milk yield and fertility, whereas the cows at Sandyford are grazed for three months.  Both herds are fed similar rations using home grown forage.  A TMR using silage, molasses, barley, high protein soya blend and whole crop wheat is fed to the high yielders, whereas the low yielders are fed for maintenance.

Milk is sold on contract to Nestle for the manufacture of KitKat’s and Quality Street – even the farm sign promotes this fact.  The Lawrie family are committed to educating school children about dairy farming and every year 500 school children from 10 different primary schools visit the farm.  The impressive viewing gallery installed at Sandyford helps showcase and educate children where milk comes from to make their chocolate snacks.  The connection further endorsed as they eat their complimentary KitKat from the KitKat farmer of Ayr on their journey home.

Looking to the future Gilmour is focussing on consolidation following the recent investment and will watch how Brexit pans out.  He feels there is potential strength from Brexit and is confident it might be OK.  What he does feel is very important is the education of where milk comes from and creating a stepping stone for the younger generation to enter the industry.