The recording of the webinar is now live on YouTube: https://youtu.be/JETztkjS6Nk

WATCH the recording on YouTube of the webinar broadcast via Zoom. 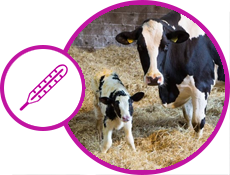 In association with IDEXX

Head of Field Services for The Cattle Information Service (CIS)

Janette Mathie is responsible for a UK wide team of area managers who have a network of milk recorders visiting dairy farmers to take milk samples for composites, somatic cell count analysis and health testing. The team also provide a wide portfolio of services including, pregnancy testing, genomics and pedigree packages all supported with a secure online portal and mobile app.  Janette has worked for CIS for over 30 years, starting off as a contract milk recorder and working her way up through the ranks, and has extensive experience in the dairy sector, providing expertise to help dairy farmers make informed decisions from data to improve health, performance and profitability of their herds. 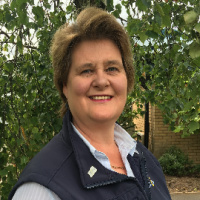 Emeritus Professor at the Institute of Veterinary Science, University of Liverpool

Hilary has worked at the Liverpool Vet School since 1969 with particular interests in research and teaching of fertility. During this time, she developed innovative learning programmes, supervised many post-graduate research students, co-authored >250 scientific publications and in 1980 established the University of Liverpool's postgraduate course in Bovine Reproduction for practising veterinary surgeons. She was appointed Professor of Veterinary Reproduction in 1994 and has served on the Editorial Boards of several scientific journals, and the Executives of many international scientific societies.

Hilary has held many short-term contracts throughout the world, including: International Atomic Energy Agency and FAO programmes, Commonwealth Universities, external lecturing/examining, and drug company assignments. She was Scientific Director of the Assisted Conception Unit, Women's Hospital, Liverpool (1985-95) and has delivered DEFRA/EU Commission reports on use of Bovine Sommatotrophin (BST; 2005), and Oestradiol (2009) in food-producing animals. She has also participated in the Royal Society – Member of Parliament programme (2003) and the Experts panel on reproductive toxicity for HSE (2006). Hilary became an Honorary Associate of the Royal College of Veterinary Surgeons (UK) in 2001, and of the European College of Animal Reproduction in 2003. She was also honoured with a Pioneer life-time award from AETE (Association of Embryo Technology in Europe) in 2020.
Hilary was a Trustee (from 2001) and recently (2019) retired as Chairman of the charity Autism Together (900 staff supporting more than 1000 beneficiaries on the autism spectrum). She is married to a Cheshire dairy farmer and is the mother of another. Their commercial pedigree herd currently consists of approximately 150 black and white cows, being milked by three robots on the Cholmondeley Estate in Cheshire. 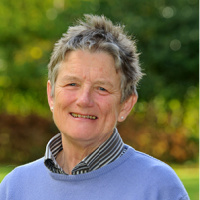 Owen is a farm vet and worked in practice for 20 years before establishing Dairy Veterinary Consultancy in 2013, based in Cheshire, England, but working throughout the UK and overseas.

Owen provides advice and training for all types of dairy businesses, including vets, farmers and others in the dairy supply chain. He has designed or co-designed several national health improvement and efficiency programmes for dairy farms including the Elanco Healthy Start Programme; the Healthy Feet Programme; the MSD Calf Health Checklist and MilkSure.

Owen is a CowSignals® master trainer and Nuffield Scholar. He is the co-author of the popular text book, Bovine Surgery and Lameness. He has a passion for farmer-vet communications and leading effective change.

He enjoys working with farmers to improve cow health as it is all about improving the lives of cows and the people who care for them. 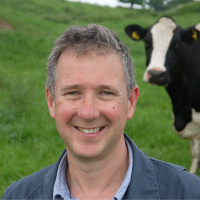